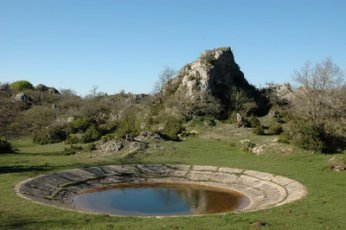 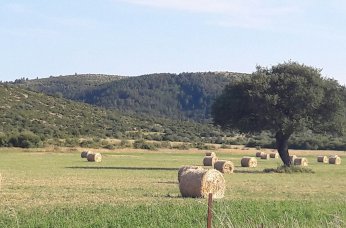 Lodeve is a former episcopalian city at the foot of the Larzac plateau where ovin breeding has shaped the landscape and remains an important activity today. It became a first rate industrial textile center in the 18th and 19th centuries thanks to the patronage of Cardinal Fleury, born in Lodeve and 1st Minister to Louis XV. Numerous workshops for the treatment of wool and weaving supplied the major part of uniforms for the army. Its architectural treasures, recognized by the “City of Art and History” label are its inheritance from this flourishing period. This glorious time was prolonged in 1966 with the creation of the National Workshop of Carpets of the Savonnerie Manufacture, the only annex to the Manufacture des Gobelins. These exceptional carpets woven on high quality looms immortalize a four hundred year old technique, and decorate the palaces of the Republic and enrich the national collections.

The Causses and the Cévennes

The Causses and the Cévennes were traveled, traversed, and inhabited since the Neolithic period (5,000 BC) by numerous and diverse populations, which notably raised livestock. In the Roman era, Cicero mentioned the “pecuarii” (livestock farmers) of Narbonnaise who practiced “l'estive” (their herds would graze on the pastures of mountain) as did the Languedoc herdsmen. A passage in “The life of Saint Benedict of Aniane” allows us to deduct that monks practiced the raising of sheep and transhumance from very early on. Starting in the 11th century, the monastic orders (Benedict, Cistercians) and the religious and military orders (Templar, Hospitaller) received mountain land to cultivate and graze the herds of the low country, besides the resident herds. Between the 17th and the 18th century, agro-pastoralism was characterized by small tenant farmer owners renting themselves out as 'brassiers' (Cereal, breeding 30 to 50 ewes for the fertilizer, wool, milk and meat); large domains were in the hands of nobles and the bourgeois, (Cereal, breeding 200 to 300 ewes for the fertilizer, wool, and cheese); and numerous peasants and proletariats without their own land resources, worked patches of land on the municipal and communal plots and offered their physical labor.

“The exceptional universal value of the Bien des Causses et des Cévennes is as much in the cultural landscape of Mediterranean agro-pastoralism as in the landscape, architectural and immaterial attributes. The landscape attributes are essentially characterized by the open landscapes comprised of the lawns and moors which have always competed with the wooded environment to dominate the landscape. However the wooded places, notably the chestnut groves, are also agropastoral spaces where the forest contributes to the food of the herds. The monumental architectural heritage and other more modest buildings linked to agro-pastoralism have caught the attention of important players of the region that are working to protect it and increase its importance. A large number of elements belonging to the heritage have been preserved and are now an even bigger part of the landscaped identity. The boundary markings of the Knight Templar and the Knights Hospitaller mark the limits of the old properties. Lavognes, jasses and cellars are still used today. Terraces are cultivated and the pathways are looked after. The agropastoral activities of this region also generate high quality products that are recognized by national and European labels. They are linked to the know-how, the particular terroir and remarkably adapted ovine, goat and bovine traditional domestic races.

The regression of the forest between 1830 and 1913 was accompanied by an augmentation of pastures and the detriment of cultivated land. This evolution is linked to a profound change in the agrarian system due to development in the dairy industry led by Roquefort. Starting in the 1950s, the rural exodus accelerated due to youths demanding more modern living conditions. A restructuring of land began. Under the influence of the common Agricole policy, the intensification of the breeding systems was emphasized and createed pressure for transforming routes and moors into pastures, leading to the acceleration of the process of pasture colonization. The intensification of the breeding systems occurred in the 60s because of increased fodder resources for ewes, either cultivated or bought.

Summertime transhumance allowed high altitude grass to grow abundantly across vast surfaces in a complimentary way: the local sedentiary herds could not only consume the fodder resources, their number being calculated according to the winter fodder resources, which were quite rare. On the other hand, the arrival of a large amount of animals meant an opportunity for the “natural production” of organic fertiliser which was quite prized by the highland inhabitants.

“According to the Convention clause which concerns the protection of world, cultural and natural heritage, the Causses and the Cevennes were added to the list of World Heritage Site under the theme of Mediterranean agro-pastoralism. Its inscription onto this List consacrates the exceptional universal value of a cultural or natural property so that it may be protected for the advantage of all the humanity”